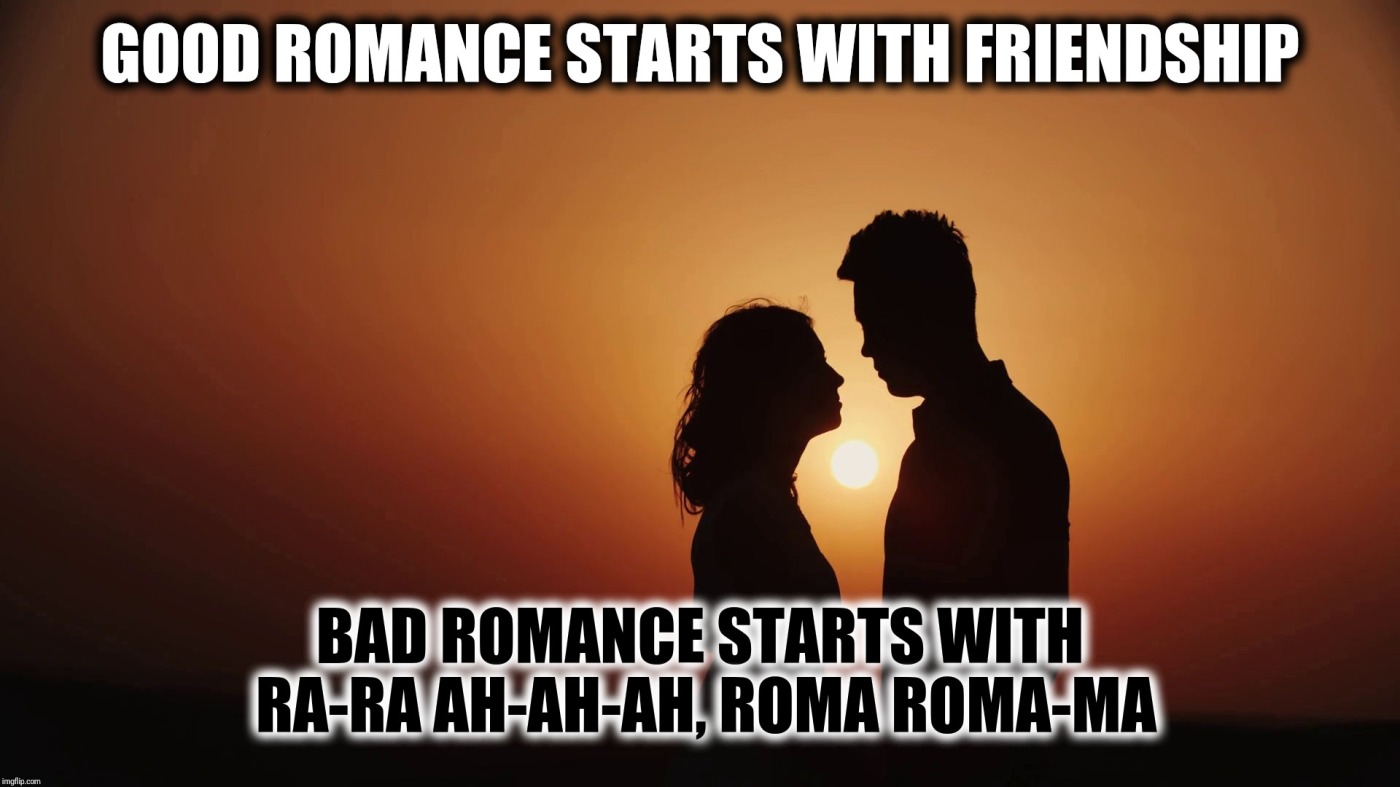 At the time of writing, the pheromones from Valentine’s day are still wafting through the air in workplaces and homes across the country. Cards are still on display, chocolates haven’t all been scoffed and roses are looking alive and beautiful before they inevitably fade and rot and leave you with the realisation that you spent £30 on something which lasted a week.

Romance has been in the air. It’s tough being single to think about romance, and how you’ll ever find it within yourself to ever be romantic again. Finding not only someone who will appreciate it, but the strength and desire to be romantic yourself with someone new is all a bit much to consider.

I was thinking about this during a twitter chat organised by the ace Shh!, where one of the questions was around memorable Valentine’s Days. A few tales were told about roses and surprises, and it made me think back to a couple of times I, too, was romantic. I’m going to indulge myself with the two examples I shared; one short, and one a little longer.

The first example happened many years ago, when my ex and I had only recently moved in together and money was tight. As a result, we had agreed a firm no-money-spent rule between us. We handmade cards (mine involved a macaroni heart) and had a nice morning of breakfast in bed before she headed off to work in London.

I, however, had decided that rules were often more like guidelines, so had sorted out an additional thing to do. I got hold of a few dozen sheets of green paper and red paper from a cupboard (which didn’t cost me anything extra so, arguably, was within the rules) and spent several hours hand cutting out red petal shapes from the red. These were then individually glued together to eventually form something which looked like a rose head, before then being glued to a tightly rolled green paper stem (with a few green leaves added for good measure). Repeat 12 times and I had a handmade bunch of roses, all at no cost other than hours and hours of time.

I’ll admit, I felt a bit of a prat carrying them on the tube as they were quite obviously fake and nowhere near the size and ostentatiousness of many of the other bunches I saw on the journey. No-one knew of our private deal, so it just looked like I was a cheapskate, but when I delivered them to her desk the smile on her face made up for it all.

My second is a slightly more challenging example, both to have arranged and to recall. I know my marriage ended badly (read more about it in my previous post if you haven’t already), but that doesn’t mean any of the things that happened before it mean any less to me, so here’s the story of something fairly fun I did one Valentine’s weekend.

Valentines that year fell on a Tuesday, so my ex and I had decided to have a nice romantic meal in and watch a movie with a bottle or two of wine. We had two kids at that point, so besides ever-present money worries we also had responsibilities, meaning big nights out and trips away were out of the question. Besides, we’d been together for nine years at that point – we’d done just about all of the normal things a few times over.

During those nine years I’d regularly bemoaned society’s obsession with marriage. Coming, as I did, from divorced parents I knew that marriages did nothing to hold a relationship together that wouldn’t also be there outside of marriage. For us, we had two young children and were utterly committed to each other; a ceremony and expensive after-party wouldn’t change that surely?!

In January of 2008 my ex finally came around to my way of thinking. She agreed that it would be better for us to clear debts and save for a house than it would be to get married when we already love each other.

The next week I went out and bought the engagement ring.

Yes, I know that makes me sound like a bit of a dick, but I wanted her to want to marry me because she really wanted to, not because society told her that it was the thing to do. Being married didn’t really change much at all, but in some ways it did. It formalised an informal arrangement and brought us together in a way even I didn’t expect it would. As soon as I knew she wasn’t bowing to the whims and desires of tradition I knew she really meant it.

The ring I bought from Hatton Gardens wasn’t massive. Yes, it cost almost two month’s salary, but it wasn’t bling by any means. It was simple; a platinum band with the clearest stone I could find, with the band hooked and curved slightly with the intention that it would click into place with the wedding band that would follow, and eventually an eternity ring would click into place on the other side. Yes, I was thinking long term.

Ring bought, I moved onto the next stage of the plan. I arranged for my ex’s best friend to put a request into her for some help looking at furniture for her new house on the Saturday before Valentine’s Day. Her friend knew something was going to happen but not what, but was game anyway. I was “working” that day, so my mum offered to look after the kids. So far, so smooth.

Saturday rolls around. I leave home just as the friend arrives, and my ex and her friend take the kids round to my mum’s house. However, before she could leave, my mum handed her an envelope and told her that she had to open it. Inside were two things; a sheet of paper and a DVD she had to watch, which she duly did.

The DVD was of me, and was me telling her that today wasn’t going to be spent in IKEA but, in fact, would be spent on a treasure hunt. The paper she was holding had four elements to it: first, was a cryptic clue, second was a sudoku puzzle (which she was addicted to at the time), third was a set of hangman-style dashes and fourth was a challenge.

She was to work out where in London to go by working out the cryptic clue, and on the way there was to complete the sudoku puzzle. Each puzzle had some shaded squares which, when copied out to the hangman dashes would give her a phone number that she had to call. The number would be for one of our friends, who would be at the meeting point and would need to witness her completing the challenge before she would be given the next envelope and have to follow it to the next point.

In all, there were 20 envelopes for her to get through. 20 places, from Buckingham Palace to the O2 via the South Bank and Trafalgar Square. 20 challenges, such as getting her photo taken with a tourist to having a caricature drawn at Leicester Square via doing a brass rubbing at the Crypt. And 20 different friends to meet along the way, each of whom I would be meeting at a specific time and place to brief them before I hid myself to make sure it all went smoothly before hightailing it to meet the next person.

Most of the time she did well. All the challenges were completed, all the friends turned up and she went to the right places. She did get lost regularly though; I’d taken for granted that, as she was a born and bred Londoner like me, she would know basic London geography. She would know, for example, that to get from Buckingham Palace to St James Park and then Trafalgar Square meant walking from the gates to the park across the road and then walking through the park to the end. No; each time she went from tube station to meeting point, then back to tube station to tube to the next stop. She ended up using cabs more than once.

Eventually, though, she made it to the final stop. Tower Bridge. It was dark, slightly chilly but not cold. My brother had been with her at the previous stop of the Tower of London, and walked over the bridge with her to where I was waiting on the south buttress. Her final challenge was to decipher a message, which she would see by looking at the south bank of the Thames.

As she looked over my brother made a quick call, and a 30 metre banner was unveiled over the side of the river wall. It was held up by about 50 friends and family, many of whom had taken part in the day and many who had wanted to but had been busy. It had five words on it, and wasn’t hard to decipher. “Will you marry me, Claire?”

As she turned to peer at it I, of course, dropped to one knee and held out the ring box. When she turned back to me I said a short speech, much of which is lost in time (this was before the days of camera phones), but which I know ended in “would you make me the happiest man alive and agree to be my wife?”.

She said yes, and after many congratulations from random strangers who had witnessed this endpoint we went to a nearby pub which I’d hired and we all celebrated together. And the rest is history – we were married four months later in the Barbican and enjoyed almost every day for years to come.

The fact that things ended badly doesn’t invalidate all that came before. Perhaps if I’d made even more of an effort over the years to maintain romance she wouldn’t have done what she did. There’s no way of knowing, but I do know that it wouldn’t have made things any worse.

One day I’ll find that woman who makes me want to be romantic again, whether it’s a grand gesture like a day-long treasure hunt around London or simply a bit of arts and craft. I’m never taking romance for granted ever again; nothing is going to take that out of who I am and I’ll definitely be making sure that my eventual partner sees that side of me after 18 years as strongly as after 18 months.

If I’ve learned nothing, after all, it’s that the perfect woman for me likes a bit of romance in her life. Who doesn’t?

4 thoughts on “A romantic past”