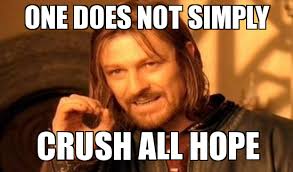 (Geek Alert) While most of the recent additions to the Star Wars cinematic universe have been utterly awful – and by “recent” I mean anything after 1983 – the release of Rogue One was a welcome change from the Jar Jar Binks/Snope/your-mother jokes that have made the rest of them nearly unwatchable.

A recurring motif in the excellent Rogue One was a simple one – hope. It’s what rebellions were built on, and all that is needed to sustain a vision of a brighter future once all of the struggle and pain and sacrifice has been made to overthrow repression, oppression and depression. The underlying message of hope is one which sustains not only the plot but also stuck with me as much as the iconic Darth Vadar scene did.

It was hope I was considering more and more over recent months; after all, I am steadfastly refusing to give up looking for love. This author is soon to turn 40 (as of August 2020), and have been continuing to discuss on Twitter how this may or may not affect my chances moving forward. 40, for some, is seen as a big deal, a wall through which no hope can travel and after which you are effectively consigned to the scrapheap.

Of course that’s not true. As much as I don’t fully subscribe to the “age is just a number” crowd, it doesn’t perhaps matter as much as it might be seen from the inside. There will definitely be those who chose a round number as an arbitrary cut-off date for potential romantic connections, and there is a mental hurdle others make at realising a round number is just as relevant or irrelevant as any other number.

But, regardless of reasoning, I’m not giving up. Whether it is getting older, repeated heartbreaks, the strains of dating, the expense; whatever it is that is making it hard to carry on sometimes is nevertheless not stopping me from feeling hope.

Which is why it becomes all the more frustrating when I share this with others and all they do is tell me to give up. Either that or they tell me how they gave up and are apparently far happier as a result, advising me to do the same and “just be happy being single and on your own”. It’s not just me who gets that response, either; it’s rare that anyone shares a dating challenge on social media or with some friends and isn’t told by at least one person that it’s not worth it.

How is that okay? How is it fine to tell someone who may be feeling a little vulnerable that they should just give up as there’s probably no hope? It feels a little like telling someone who wants to start getting healthy and fitter to just not bother – you tried it yourself and it was a lot of work and pain for minimal results, so better to just give up and go back to the sofa where you can enjoy a box set which will definitely make you just as happy.

The search for love is hard. With some exceptions, it can be long too. There will be pain along the way, challenges to overcome and times when support is needed. Some people aren’t looking for love and that’s fine, but that doesn’t give them the right to undermine those of us who are. It doesn’t make it alright to imply that their approach is the better one and, by extension, they are more enlightened than we are.

Those who have given up looking have done so for a range of reasons, be that for their own mental health, for self-care, to open up other opportunities they’ve been putting off or anything else besides. Their decision to do so was precisely that – their decision. They weren’t forced to, and can change their minds at any point should they choose too, but it’s also true that the decision that was right for them is not necessarily right for everyone else. Constantly telling people who are facing challenges to just give up is not on.

If somebody asks if you are still dating and why you chose not to, then by all means tell them. Be open and honest and provide an alternative viewpoint. But if all they are doing is sharing fears, concerns or setbacks about their own dating lives stop telling them that they are fools for keeping on trying.

Stop making out that their searches are hopeless and that they would be better off following your lead. Stop undermining their searches; it does nothing for you and nothing for them other than fill them with self-doubt and reinforce the notion that love is something that just happens or doesn’t regardless of your efforts to find it. Your belief that this is the case is merely that – your belief. It is not fact, and is not a belief you need to impose upon other people who have different beliefs.

Hope is a beautiful thing. It gives us courage to persevere, to dream of a better future and to cling to the dream of happiness even when we are at our lowest points. We are looking for the light at the end of a long, lonely tunnel. When you hear us talking about the light, there is no need to try to convince us that it’s merely the light of an oncoming train.