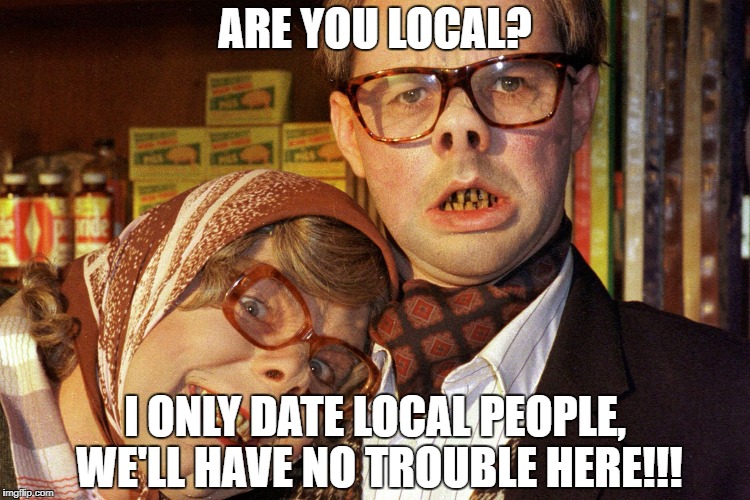 It was the first date I’d been on post-breakup. I didn’t know what to expect. She’d described herself as fun loving, energetic and someone who loved travelling. sounded good. Sounded exactly like the sort of person I wanted to meet. I was naive. I believed her.

With not a hint of exaggeration, she had left the village where she lives for more than one day twice in her life. Once was to visit family in Norfolk. Another was to go on holiday to Spain with her Auntie.

She was the very definition of a local girl. She worked at the school she had gone to as a child; her mum was the headteacher there. She saw no reason to go out much further as she had a nice local pub, some local restaurants and local leisure facilities. The thought of going out on a date in London gave her the shivers and a cold sweat; the journey in, the amount of people, the cars, the noise, the smell.

We didn’t have a second date.

Since then I’ve met a lot of women from all over the place. Some have been local, like five minutes drive from home local. Others have been from all over London. I’ve been on dates near and far, with varying degrees of success, and have tasted short relationships with both too.

Dating someone who lives miles away is a lot of fun. Exploring their neck of the woods, going to pubs and restaurants and parks and events near them. Getting ready and either driving to see them or jumping on a train. Being used to travelling, so both heading into London to meet up because it’s as easy for both of you to do that as it is to visit each other. The city opens up loads of opportunities for fun, after all.

However, it also means things need to be planned more. If they live miles away then you can’t just pop by to see how they are doing. Unless the planets align, you’re rarely randomly in their area so everything is a special effort. They’re not a cab ride away, or a walk away.

Dating someone who lives locally has its benefits. They are just down the road, so you are always able to drop them a line to see what they are up to. Coming home after a date is something you do together rather than going your separate ways or you going miles out of your way to make sure she gets home safely. If you’ve got an hour to kill before the kids come home then certain opportunities present themselves. If they are feeling ill then you can pop round with a bunch of flowers and some chocolate to make them feel better, or cook them lunch when you’re working from home. It’s all so easy, so convenient.

But your world becomes very, very small. Like that first date I went on, why would you go out-out when staying local is easier and more convenient? Before you know it you realise that you’ve not been out on a date anywhere further than a cab ride in months and are quickly running out of new local places to go. Going into London is always something to be planned, not just when you both find yourself in the area.

The right person, of course, makes all this an irrelevance. Where you are doesn’t matter if all you care about is the person you’re there with. But when I don’t go to new places I do miss them. I like finding new places. And I’ll be honest, I like going away from home, even if only for a night or two. It feels weirdly like a holiday, which when I’m staying locally simply doesn’t happen.

In an ideal world I will find someone who lives relatively locally but who works in London and spends a lot of time there. The best of both worlds. I’m aware that the more specific I dream of then the less likely I am to find that person, and I’m certainly never going to rule someone out, but I’ll never stop dreaming.

After all, perhaps one day it won’t matter where they lived when we met; we’ll both be as local to each other as it is possible to get. Here’s hoping.

2 thoughts on “Are you local?”