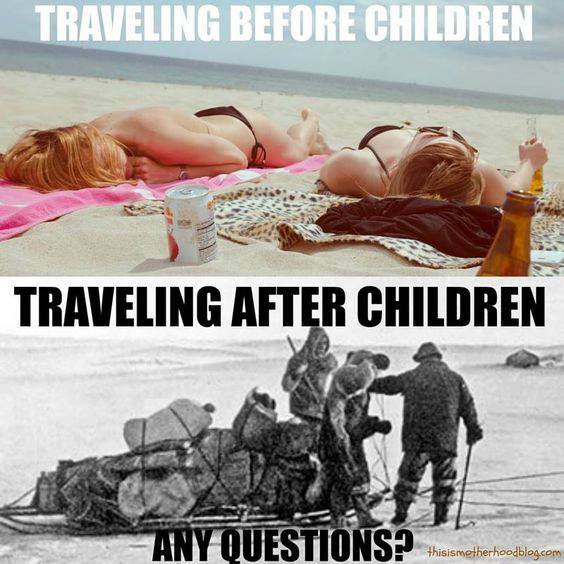 I’ve recently returned from our first ever family holiday abroad. Back in the day we never had enough money to go away, but thanks to an extra commission payment I decided to go right ahead and do it. What’s that? You think it was instead an excuse to blow my ex’s trip to Butlins out of the water? You cynic, you…

Living in the South East of England gave me a big chunk of Europe to choose from, so on the advice of many I plumped for Croatia. It was INCREDIBLE! As well as beautiful sights and weather, the kids really got into it and appreciated every second. We ate out, visited places, did a day trip to Venice and another to Slovenia just because we could and ate more ice cream than I thought was possible.

I could write in detail about how I felt about doing it and not only surviving but loving the experience (and may well do so), but for now I wanted to share some of the best advice I got for travelling with kids while it’s still fresh in my memory.

Check if your car rental firm does child seats. Most of them do, and for free, which saves you needing to lug them with you in your bags.

Have a separate note of all of your kids suitcase lock combinations and spare keys for padlocks and check them before leaving. There’s nothing like needing to open a bag because one of the kids packed a pair of scissors and not knowing the code. Not that this happened, of course…

Pack an extension lead. Odds are you’ll only have one travel adapter, so keeping all the many devices charged will be difficult at best. This way you can take all your normal British plugs and only need one single outlet.

One kid, one cabin-sized suitcase. Have them choose the clothes to fill it (which you can check, of course) and then have them pack it. That way they feel a sense of ownership of it and will learn a valuable skill. They can also pop a few extra things in there if they have the space.

If there’s any way at all of only taking hand luggage, do it! Having to stand around waiting for one or more large suitcases to hit the carousel, especially at the end of the holiday, is a real buzz kill.

AirBnB rocks. Instead of having a hotel, worrying about who would sleep in which rooms and worrying about the kids somehow ending up in corridors would’ve been no fun at all, let alone knowing that as soon as they were asleep you would have to be silent. Our cottage had two rooms for the kids and a separate bed and room for me to relax in each night.

Put your phone on airplane mode. I’m not going to be one of these people who says to leave your phone at home as they are incredibly useful, from researching routes, things to see and simply taking photos, but not having notifications popping up allows you to be more in the moment. Schedule time at the end of the day, when the kids are asleep, to do a single daily update with your favourite photos so people can stay in touch without being spammed.

Give the kids some jobs to do. Whether it’s setting out the breakfast, choosing where to go for the day or simply paying in shops and asking for the bill in restaurants, involve them so they feel part of the adventure rather than having everything done for them.

Up and down. Works for see-saws, perfect party playlists and lifts, and it works for relaxation and activity days too. Have one day which is spent doing something more active, then another spent lounging at a beach. If it’s all go-go-go the kids will be tired out in no time, and if it’s all relaxing they’ll soon be bored.

Be where you are! Yes, sitting around a swimming pool might be nice for a while, but you can do that anywhere. If you are somewhere that has sites to visit and things that can’t be seen anywhere else, take them. You never know when you’ll be there again.

Brief and brand them. The thought of one of them going missing abroad is terrifying, so make sure they know what the local police look like and what to do if they can’t see you (“don’t run around, stand still and Shout-shout-shout!”). Take a photo of each of them every day which includes only them, their face and their shoes, so if they do go missing you’ve got an up-to-date photo to show police. And take a sharpie to write your phone number on their arms each day. Even if they say they remember it, in a panic (or if they’re unconscious) they may well not be able to recite it.

If you’re flying on a budget airline double check on the baggage allowance and, if you can, upgrade to both priority booking as well as making sure you have allowance for both a cabin bag as well as a separate hand bag. That way the kids can have a rucksack to carry some toys, books, a tablet and other fun things to keep themselves occupied on the flight and the trip. Just remind them, though, that they’ll need to be the ones carrying it!

Enjoy! You only have a finite number of holidays you will ever take with your kids while they are still children, so do all the things you want to do with them, take too many photos as there will never be enough but put the camera down most of the time and have fun.

Longreads : The best longform stories on the web